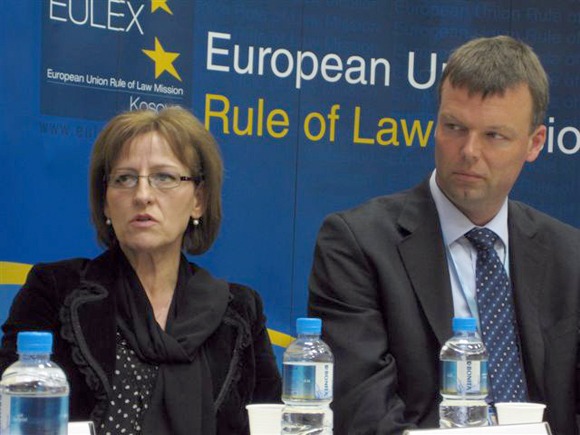 âI would shame my family if I demanded my equal share of property,â a female protagonist declares in the Albanian film Asking for inheritance - asking for trouble. The film and panel discussion that followed, focusing on female property and inheritance rights in Kosovo, was held to mark International Womenâs Day.

The event was part of a new monthly initiative started this year by the Office of the Presidency of EULEX Judges, the EULEX Best Practices Unit, and the EULEX Human Rights and Gender Office. Its aim: the identification of human rights and gender-related problems associated with the implementation of the rule of law.

In his opening address, Alexander Hug, the Head of EULEX Human Rights and Gender Office (HRGO), said: âOur theme today focuses on the hiatus between theory and practice: Kosovoâs applicable laws guarantee gender equality, yet only a small percentage of women own land or other property.â

The film showed that many Kosovo Albanian women do not receive any inheritance, either because they waive their right to inheritance in favour of their brothers, or because sometimes the inheritance claim before the court ignores them.

The panel discussion raised several important points: firstly, women are assumed to waive such rights because of social pressures, like preservation of family harmony or avoidance of conflict. Although the film focused on Albanian women, Serbian women were said to face similar discrimination.

The panel members included the acting president of the municipal court in Pristina, OSCE representative, directors of the Lawyersâ Association, NORMA and the Kosovo Gender Studies Centre, the EULEX Justice Component and the EULEX Property Rights Unit.

A second issue was the judgesâ failure in many cases to investigate the number of legal heirs, or, should they do so, the lack of accurate civil registries, resulting in unequal access to justice.

Several other issues were identified. The courts are often left to formalize informal agreements prepared beforehand within the family, excluding women from property. Although the courts cannot solve problems rooted in discriminatory family customs, judicial institutions should strictly adhere to the applicable law. Municipal civil registries are incomplete, outdated, or underused leaving the courts unable to determine the precise number of lawful claimants. The NORMA representative said: âProperty rights were traditionally based on oral agreements as the Kosovo Albanian population did not trust the state.â

Solutions proposed include closer interaction between courts and municipal institutions, improving civil registries to include all family members, rapid notification of deaths to municipal courts, the use of sanctions for those ignoring the law, awareness campaigns targeting women and men, and learning from good practices in neighbouring countries.