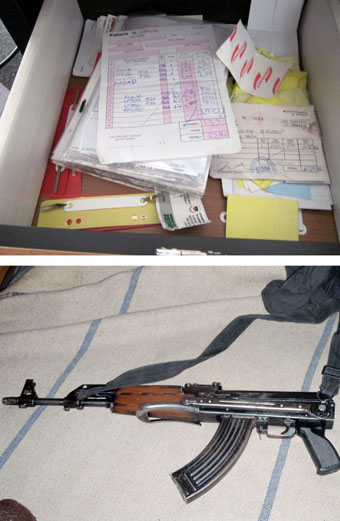 EULEX Task Force Mitrovica has conducted two house searches near Vushtrri/VuÃ§itrn, acting on a search order issued by a local pre trial judge. Business documents and data as well as an AK47 assault rifle with ammunition were seized. The house searches, which took place on 4 March, were part of an ongoing investigation into a business-related fraud case.

Some of the seized materials during the house searches


The operation is an example of the important work of the Task Force Mitrovica, which was established in November 2010 to concentrate efforts in the fight against organised crimes and major crime in the north of Kosovo on both sides of the Ibar. âThese kind of operations are very important for our investigations. They are also some of the most visible parts of our work, where people actually see the rule of law in action. And criminals take notice too. For them it is a warning that we are serious and we will bring them to justice,â said the EULEX prosecutor in charge of the operation, who cannot be named because of the sensitive nature of the investigations.

Task Force Mitrovica acts under the executive mandate of the mission and consists of EULEX Police investigators, EULEX Customs investigators and EULEX prosecutors. The operation in Vushtrri/VuÃ§itrn was also supported by Kosovo Police.