Despite differences â the common future 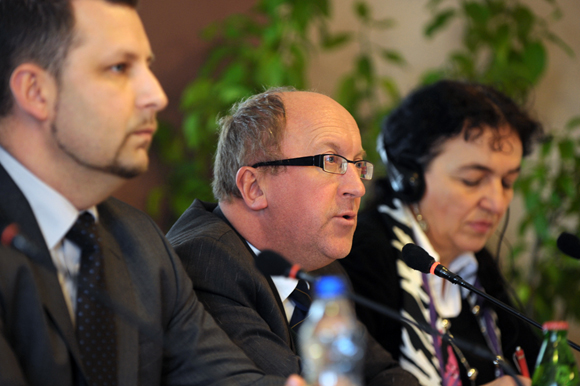 âI hope that the forthcoming Dialogue will create a better atmosphere for everyone, and it will bring this area and the whole region closer towards European Union,â said the Deputy Head of EULEX Andy Sparkes at a roundtable held in Gracanica/GraqanicÃ«.

The roundtable âAfter the conflict - real lifeâ was organised on Friday 4 March by the âCentre for Democracy and Development of Southern Serbiaâ. The Centre has organised a whole series of debates in southern Serbia and Kosovo. Besides the Pristina-Belgrade Dialogue, the topics at the Gracanica roundtable were about every day problems that the Serbian community faces and possible solutions.

A number of issues were discussed including the Dialogue, north Kosovo, returns and crime. Those present besides Andy Sparkes were: Dalibor Jevtic, the Executive Director of Serbian Liberal Party, Goran Arsic, Head of Kosovo District, Dragan Nikolic, Head of Kosovo-Pomoravlje District, and Sreten Ivanovic, Head of United Serbian List. There was also a strong media interest in the event.